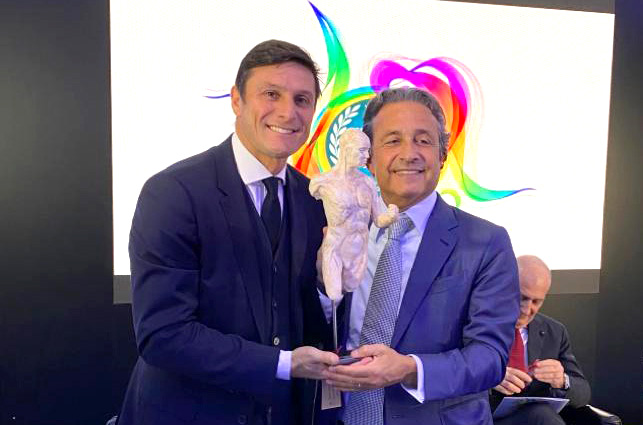 An important and prestigious award for Javier Zanetti. The Nerazzurri Vice President received the “Varaldo Di Pietro” Patron of Sport prize for 2019 in the Executive Hall of San Siro, with the award sponsored by the Italian National Olympic Committee and the National Order of Journalists.

This was the eighth edition of the prize, promoted by the “Varaldo Di Pietro Foundation for Patrons of Sport”, with the award given to those who make an important contribution to the growth of sport on both a national and international level, as well as promoting the universal values expressed in playing sports and in their social activities.

These were the words of Zanetti during the award ceremony: “I’m honoured because this is an award in line with the values that I’ve supported for my entire life and career. You can convey a lot of positive messages through sport. Social responsibility is my other passion besides football: I’m proud to be a part of Inter, they’re a Club who spend a lot on these initiatives, with Inter Campus as a shining example.“

“The message for the new generation is simple: you’ll get nowhere without making sacrifices, young people shouldn’t think that they’re owed everything. Let’s not look at children as future champions: the secret is to let them grow up and enjoy themselves.”

The following were the reasons why the Technical Committee made up of journalists and national representatives from the world of sport and chaired by Dr. Giovanni Di Pietro, President of the “Varaldo Di Pietro Foundation for Patrons of Sport”, decided to award the prize to Javier Zanetti:

“An exemplary figure of a man of sport, Javier Zanetti represents a worldwide point of reference for his recognised ability to communicate, both on and off the pitch, for his high ethical and moral values shown through both sporting and humanitarian activities. A champion of style and professionalism, he has always fought to show great fair play in pursuit of his own goals with tenacity, courage and loyalty. He holds the record number of appearances for Inter, and has made an essential contribution to the promotion of the sporting image throughout the world, combining his role as an exemplary champion with social commitment through the Pupi Foundation, set up in 2002 to support disadvantaged children. Since 2006 he has also been an ambassador for “SOS Children’s Villages”, a non-profit association for children’s rights.” Javier Zanetti is also the face of the Special Olympics, an organisation that deals with the worldwide sporting activities of athletes with intellectual disabilities, with a representative of the athletes and managers present at the event.